A train goes round a circular track at a varying speed, but in a constant pattern (i.e. its speed at each point on the track is the same every time it goes round). Prove there must be at least one pair of diametrically-opposite points on the track at both of which the train has exactly the same speed.

The prize was won by Mohaned al-Bassam, who pointed this out:

For every point x on the track, define

The function is continuous. Therefore

(same reason as: if you travel in London from South London to North London, at some time you must cross the river). ▇

The general case requires ideas from algebraic topology, a branch of maths often taught as a third-year option in uni maths courses.

Borsuk developed many of his ideas at the Scottish Café in Lviv (a city then in Poland, now in Ukraine), a meeting place for mathematicians where they kept a list of mathematical problems (“the Scottish book”: bit.ly/sc-bk) and prizes were given for solving them. The café is shown below. 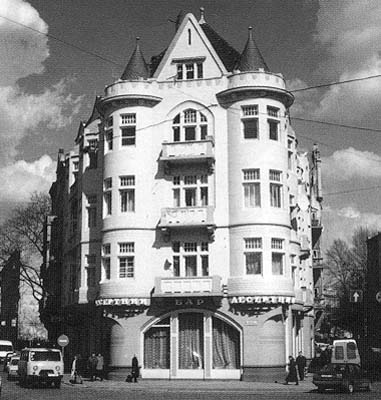